Large numbers of Canada Geese on lower Chemong Lake are a common occurrence through the ice free months. A single Goose puddling around on its own on November 26 definitely caught our attention. It was occupying a small patch of open water at the mouth of a stream entering the lake. The rest of the lake was frozen with about 2 inches of ice. We never saw the Goose fly and had no idea where it roosted at night.

During the first few days it remained on the open patch of water and was able to feed on aquatic vegetation still available in the perimeter areas of the open water. The first change to this behaviour occurred on Thursday, November 29, when the Goose slowly waddled across the ice to shore where it found access to green grass. While watching the Goose, we came to realize that there must be an injury affecting its behaviour. Feeling bad for the bird, we decided to name it: thus started our connection to Gus the Goose.

Gus alternated between feeding on grass and resting throughout Thursday. By late afternoon with daylight receding, Gus hopped on to the ice and waddled back to open water. I hung around for a while but darkness set in and I could no longer see him. There was a generous amount of droppings left behind which I cleaned up and put on the compost pile. For the next two days, Gus repeated the same routine of walking to shore and feeding on grass.

By Sunday December 2 a change in behaviour took place. Gus did not show up for the morning but was back for the afternoon when he fed again on grass and rested. Late in the day, I wanted to get a photograph so tried to sneak up on Gus by hiding behind the garden shed. He appeared more alert than in previous days. Fortunately I had my zoom lens and was able to get a couple of photos of Gus along the shoreline. Then much to my surprise, Gus took flight! He did not get much altitude, perhaps getting as high as 4 feet above the ice, before landing in the open patch of water. While Gus was in flight, I managed a few more photos. It was clearly evident that his left wing was injured with visible damage to the feathers. While Gus floated on the open water, I proceeded to clean up the droppings he left behind.

Poop alert! For those of you who don't share my enthusiasm for scatology, please feel free to skip to the next paragraph. I think many folks have had the unfortunate experience of stepping on droppings left by Canada Geese. An interesting question arises: how much do they produce? Suddenly I had the brilliant idea that I could actually get a useful measurement. Gus the Goose had been feeding on the grass for 2.5 days and of course producing droppings during that same time period. I knew he was the only Goose present so the droppings were from a single Goose. I picked up all his droppings and measured the total volume at 2.5 litres - a production rate of 1 litre per day! Imagine the amount from 50 Geese!

During Monday December 3, there was no sign of Gus. He returned for a half day on December 4. I was curious about where he spent the time and how he got there. It wasn't long before I got my answer. When I tried to get another photo of him late in the afternoon, he jumped up into the air and proceeded to fly higher and higher. Much to my amazement, I observed him get above the tree tops and then watched him disappear into the distance! He performed similar feats over the next two days. Then we had a cold snap and the open patch of water was frozen on Friday. Thursday December 6 was the last day we saw Gus. We believe he is still alive and suspect that he has joined the legions of Geese occupying the Otonabee River in Peterborough.

Gus The Goose before taking his first small flight 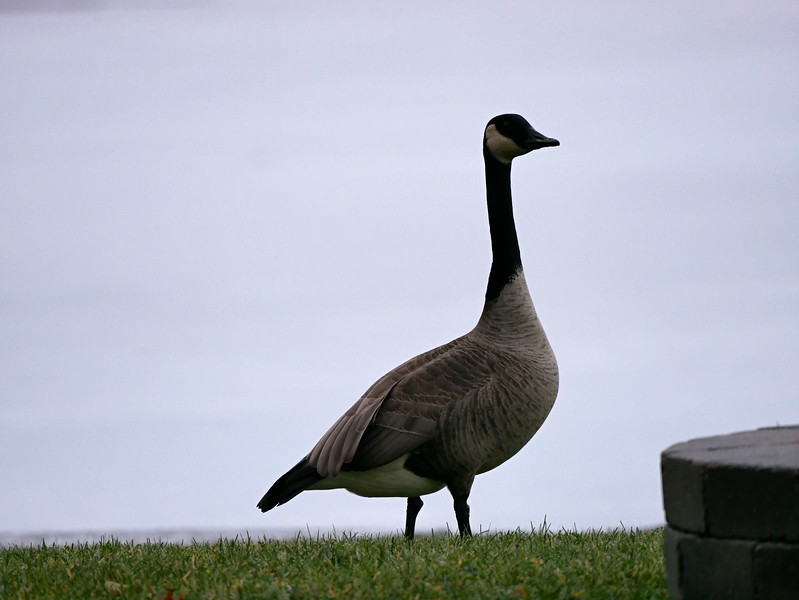