The start of this dramatic story was innocent enough. A family of Canada Goose adults and goslings moved to our pond and set up camp. We actually witnessed their arrival and were amazed at the distance traveled and pin-point accuracy in finding the pond from ground level. Although we were not fond of the copious scat left around the pond, it was interesting to watch the goslings grow so quickly.

The drama started a couple of weeks later when I heard and observed a commotion by the pond shore. When my eyes adjusted to the scene, to my amazement one of the adults was beating its wings and stabbing its bill at one of the goslings in the water. The other adults and goslings were on land. The gosling went limp and then appeared to drown and submerge. At the time I was surprised beyond belief at what I had observed: it appeared that one of the parents had killed its own progeny. The adults and remaining goslings soon packed their bags and left the pond, which at the time also appeared to be an odd turn of events.

Late in the day, just before dark, I could see an object floating in the pond. It was close enough to shore for me to pull it in with a rake. The object turned out to be the half-consumed carcass of the gosling. I left the carcass on the bank and returned to examine and photograph it the next morning when there was more light. It was then plain to see that something with a sharp, strong beak had eaten most of the body, legs and internal organs of the gosling.

Given that I had photographed a Common Snapping Turtle in the pond just a few weeks earlier, it made sense to connect the dots and blame the Turtle. The bizzare attack by the adult Goose was directed at the Turtle submerged out of view with a firm hold on the gosling: the adult was trying to defend rather than kill its own young. Although a sad turn of events for the gosling, it certainly was a dramatic demonstration of the Turtle's ability to kill a small Goose.

Canada Goose family of two adults and seven goslings make the pond home for a few weeks. (May 29, 2011) 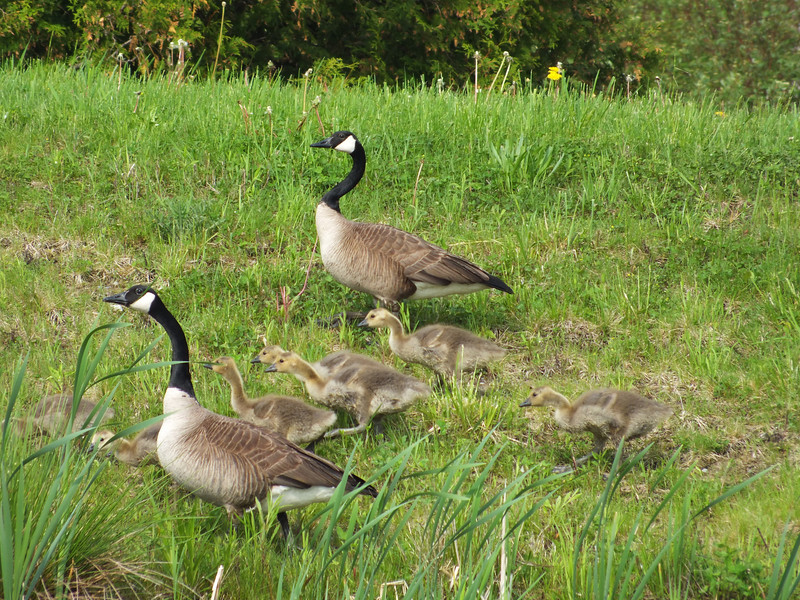 One of the goslings is killed: this photo shows the carcass with legs and most of body missing due to predation by Common Snapping Turtle. (June 14, 2011) 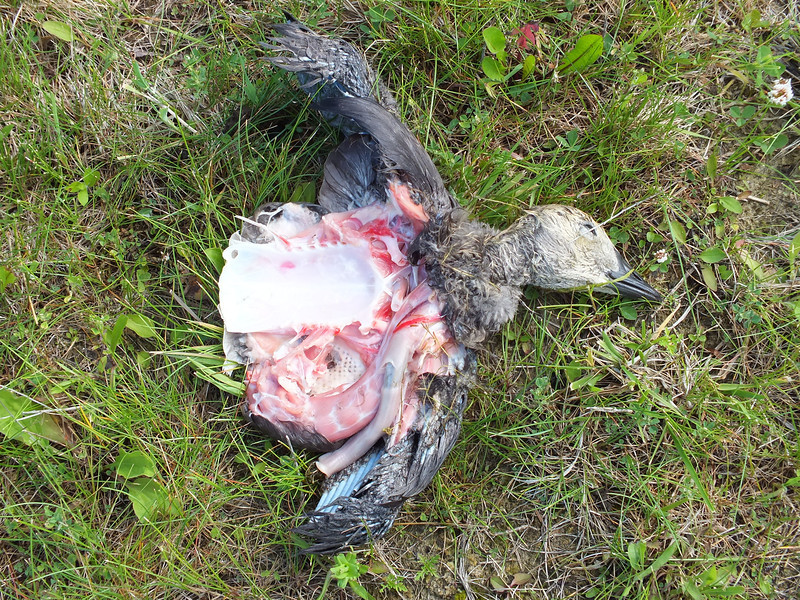 The likely culprit in this story - a Common Snapping Turtle observed along shore of the pond. (May 21, 2011)