Tracks and trails made by Squirrels have many similarities but they do have key differences that will help with species ID. Members of the Squirrel family (Sciuridae) that are common in central Ontario, with reference to winter tracking, include Eastern Gray Squirrel, Red Squirrel and Eastern Chipmunk. All three species have similar trail patterns but can be differentiated primarily based on mammal size and track or trail measurements. As you would expect, the larger Squirrels have greater track measurements. When viewed in photos without size reference, they look very similar.

Photos of track sets from three species of Squirrels

The main similarity among the three species is the pattern of four tracks in a trapezoid with two smaller front tracks side-by-side and slightly ahead of them the two larger hind tracks also side-by-side. Refer above to the photos of track sets which show a very similar track arrangement for all three species. The set of four tracks is usually distinct in shallow snow. But in deeper snow the four tracks will merge into two oblong holes that are side-by-side. In very deep soft snow, Squirrels will often avoid the snow route and stick to the trees. But when they do hit the snow, the trail can consist of a series of large "tracks". Each large "track" is basically the hole left in the snow each time the body lands, with all four legs and body sinking in to make one hole.

The most important measurement to make when identifying winter tracks for Squirrels is trail width. Keep a ruler or tape measure handy so you can avoid guessing the measurement. Measure across the full width of the trail while perpendicular to the direction of travel. The trail width is measured from the outside of the farthest right track to the outside of the farthest left track for the typical set of four tracks in a track set. Refer below to the photo of trail width measurement: can you ID the species? (if not, keep reading!). The whole trail encompasses several track sets which may vary in configuration with slight variation in trail width. If I have the option, I usually take several trail width measurements over several track sets. I then use an average value after eliminating the outliers. If a Squirrel has to stop suddenly and its feet splay outward, that would be a good example of an outlier.

The most common values for trail width are as follows: Eastern Gray Squirrel = 5", Red Squirrel = 3.25", Eastern Chipmunk = 2.25". Of course the values will vary and then you have to consider the likely ranges for these values. I have found that 4.5" to 5.5" is normal for Eastern Gray Squirrel with the occasional low of 4". For Red Squirrel 3" to 3.5" is normal with the occasional high of 4". A range of 2" to 2.5" is safe for Eastern Chipmunk.

Throughout the winter, Red Squirrel and Eastern Gray Squirrel tracks are very common. Eastern Chipmunks will be in their burrows for the winter but often emerge by late winter or early spring. March is the month when I observe most of my Chipmunk tracks. I have yet to observe or photograph Flying Squirrel tracks. But from what I have read, the measurements should be similar to Red Squirrel and there should be distinctive landing marks when Flying Squirrels glide from tree to ground. My impression so far is that they are not on the ground very often. The other distinctive member of the Squirrel family is the Woodchuck, but it is not commonly seen during the winter and hence tracks in snow are rare.

The trails for Eastern Gray Squirrel and Eastern Cottontail can occasionally be confused. The track set shown in the photo below looks like Rabbit due to the overall triangle shape of the track set instead of a typical trapezoid; but these tracks were in fact made by an Eastern Gray Squirrel. I make this claim with 100% certainty because I saw the Squirrel! In similar fashion, Rabbit track sets will sometimes take on the trapezoid pattern with the two smaller front feet side-by-side rather than one in front of the other. So what other clues can you use under these circumstances? The really easy clue is to look for little presents (scat) left by the Eastern Cottontail which is a regular feature along their trails and browsing areas. The other easy clue is to follow the trail. Squirrels usually begin and end at trees while Rabbits stay on the ground. If track details are visible, a final clue is that Squirrel hind tracks splay outwards while Rabbit hind tracks point forward. 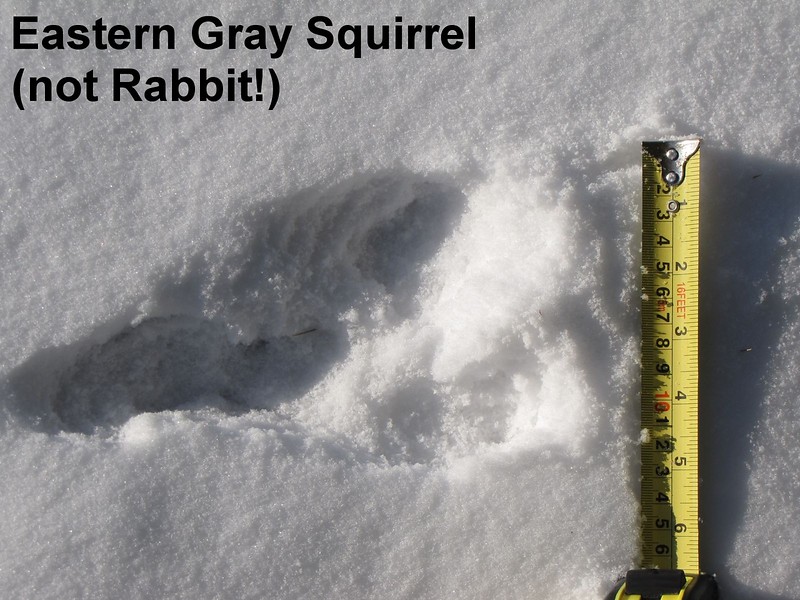